This popular arch in Barcelona city of Spain built as an entrance to world exposition in the year 1888. Arc de Triumf wad designed by Catalan architect Josep Vilaseca. He used Moorish revival architectural style for this arch. Red bricks are mainly used for it’s constructions and the beautiful stone carvings of arch also makes striking appearance. Above of those carvings the arch contains stone sculpture of ‘Barcelona rep les nacions’, Catalan for ‘Barcelona welcomes the Nations’. 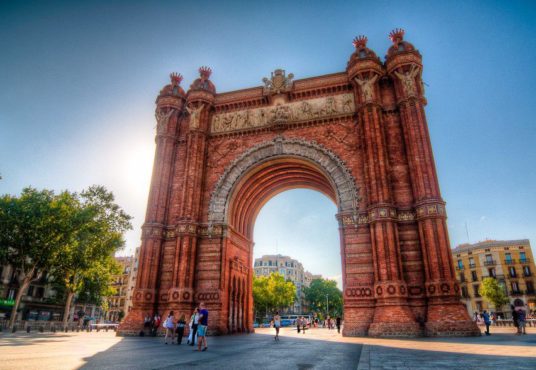 The Arc de Triomf or Arco de Triunfo in spanish, is a triumphal arch in the city of Barcelona in Catalonia, Spain. It was built, by architect Josep Vilaseca i Casanovas, as the main access gate for the 1888 Barcelona World Fair. The arch crosses over the wide central promenade of the Passeig de Lluís Companys, leading to the Ciutadella Park that now occupies the site of the world fair. It is located at the northern end of the promenade, facing the Passeig de Sant Joan.

The arch is built in reddish brickwork in the Neo-Mudéjar style. The front frieze contains the stone sculpture Barcelona rep les nacions by Josep Reynés. The opposite frieze contain a stone carving entitled Recompensa («Recompense»), a work from Josep Llimona’s earliest period, representing the granting of awards to the participants in the World Exposition. The friezes along the sides of the arch include allegories of agriculture and industry by Antoni Vilanova and of trade and art by Torquat Tassó.

Similar structures can be found in many other cities, most notably including the Arc de Triomphe in Paris, the Wellington Arch in London, the Soldiers’ and Sailors’ Arch in New York City, and the Arcul de Triumf in Bucharest.

TOP 10 BEACHES IN THE WORLD

Top 10 Reasons Why You Should Never Visit Greece